If one visits one of the country’s trade fairs to inform oneself of what’s new on the market and how the present innovations are developing,  then you meet many people who demonstrate just that – demonstration users. The newest bandages,  exoskeleton,  high tech arm prosthetics, or feet with which you can wear shoes of different heights.

You wish you had more time to get into contact with these people?  And to ask how they came to be there and what their motive was? We, from Barrierefrei, have been asking around at the OT World Leipzig at Ossur, a manufacturer for technical aids from Iceland.

I was fairly dissatisfied with my old prosthesis,  which didn’t seem to be of very high quality.  I was always scared that it would break under duress in the fitness studio. So I was looking for something suitable and that didn’t just look good. I used to pay more attention to cosmetics,  so as not to make my handicap conspicuous.  Then I was supplied with the Cheetah Xplore. That meant that I had to show my handicap openly and there are no cosmetics for it. That made me a lot more self confident.  Actually,  I’m happy and thankful for that. I started blogging and held a talk in the medical supply store that looks after me, those were my first steps in public.  I contacted Ossur and signalised that I’d like to work as a user at promotions in order to tell the public my story.  And now I’m here and feel good. I’d like to move things outside this trade fair building.  For us to be looked at there as normally as we are here. Or not to be looked at at all because it’s nothing special. You get admiration and interest here and outside scepticism and pity. 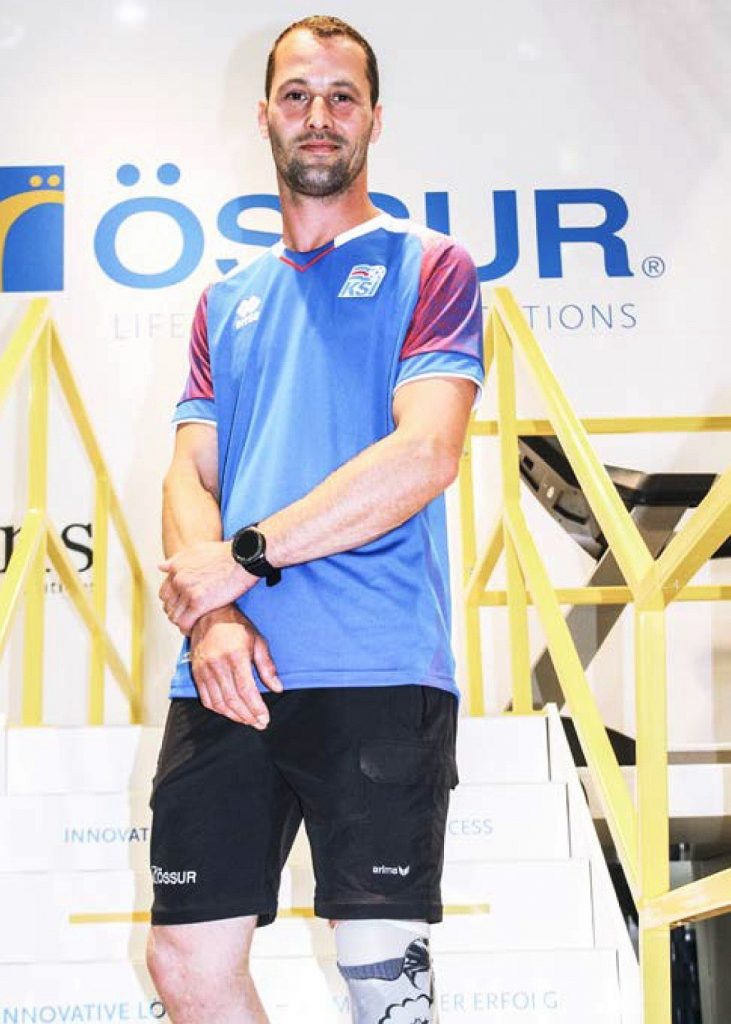 I did my own searching and Googled as to what was on the market.  I’m very sporty and active,  which I naturally wanted to keep up afer my accident. Basically,  that’s no problem and it only needs more preparation than before ( prosthesis,  fitting etc ). Right from the start , I wore my prosthesis very visibly and so I had cool cosmetics made for it. Whoever has questions should speak to me and not just stare. I like to explain what it is. Children have no barriers and like to ask. Ossur came to me a while ago because I’d been running with Pro-Flex and they were looking for people who could run well with it. And I agreed. The people from Ossur are really nice. This is my first trade fair and I’m really excited. But it’s great fun and the atmosphere is incredible.

But it should all be made more public. The first step has been taken with the para Olympics.  I’m taking a lot away with me owing to this ” job ” : You get into conversation with so many people who have the same problem as you. You get tips and exchange experiences.

I’m the head of technical service and in charge of upper and lower extremities.  I’ve been with Ossur for 7 years.  And for what feels like 20 years,  I’ve always been at the OT World.  My job is looking after the demo users here at the stand. There is a special (expert) clientèle here at the trade fair, but a mix with Joe Bloggs would be difficult, too, because you’d have to adapt to the different levels of information.  However,  the public must get more education!  The public take much more notice thanks to social media.  Or through TV shows. Even if it only takes place through “Heroes”. 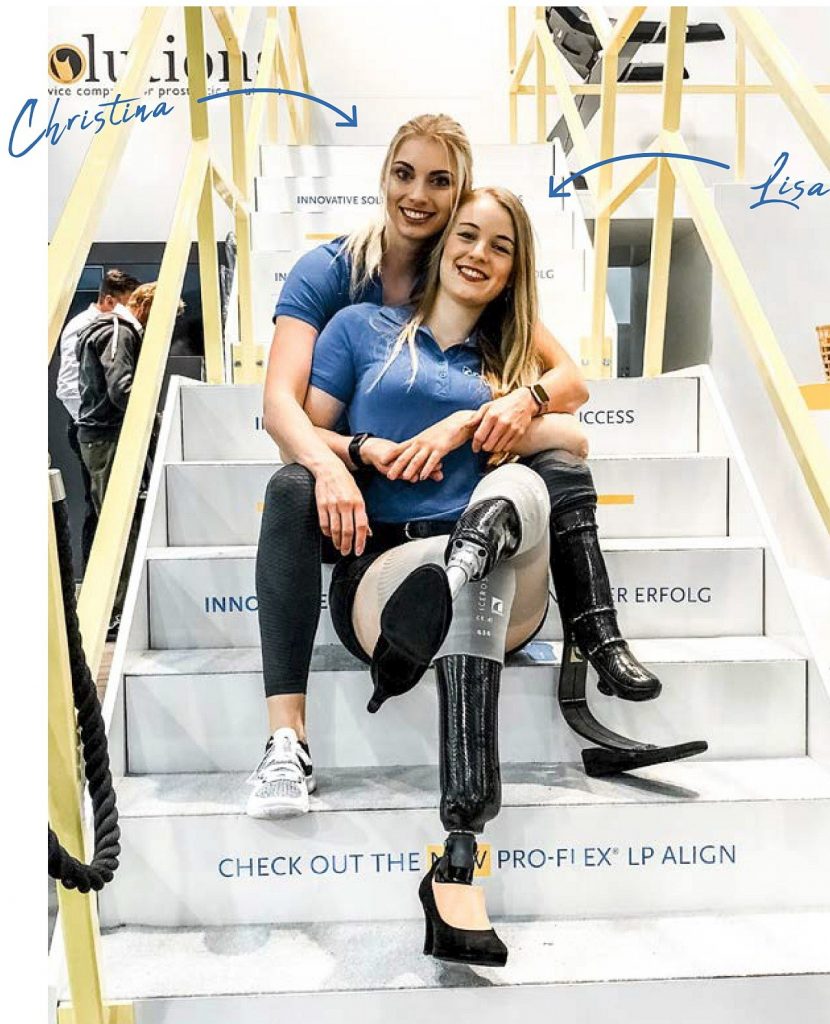 I didn’t want to be noticed before and so I hid my disability.
I wanted people to meet me first and then my handicap.  But then I started blogging.  That’s changed a lot of things. Nowadays,  I like to show myself, unrestricted,  as I am. I’ve always read the magazines there are for us, such as Barrierefrei. My young girl’s dream, like so many during puberty,  was modelling,  but that was quashed after the amputation. ” But someone’s got to be in the adverts for prostheses, ” I thought.  At that time I decided on the Cheetah Xplore from Ossur. I spoke to my technician,  who put me onto Ossur, and wanted me as a demonstration runner.  Since then I’ve been presenting the products,  full of enthusiasm. My dream came true just like that. There’s a very special atmosphere here,  it’s a completely different world.

Here it’s not: Look at what she’s got! But look at how she runs. You are what you are here and you’re proud to stand here and be allowed to give demonstrations.  In my opinion,  the public need to communicate more with and not about one another. 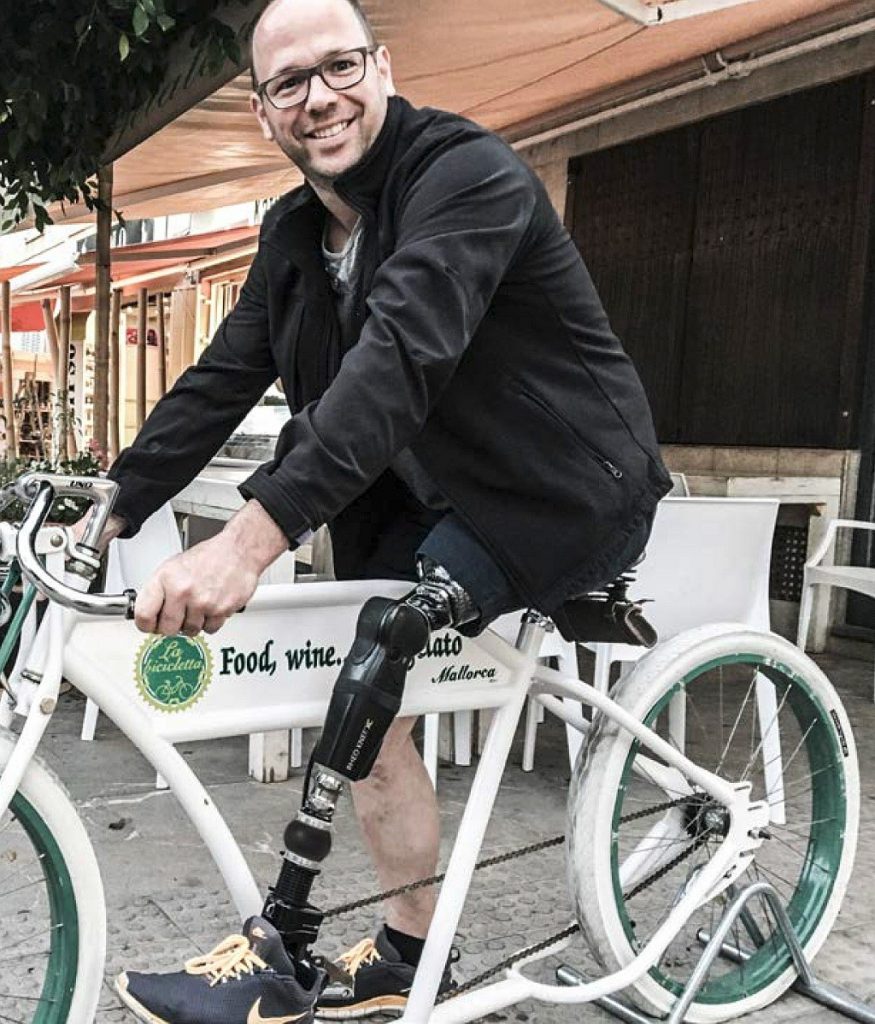 At first I ran with the Total Knee from Medi, who were then taken over by Ossur.  I stayed with the prosthesis.  Through my job I have extensive technical and handicraft knowledge and I was always a big help to the technicians because I could explain problems,  as to what was wrong with the prosthesis,  more exactly than other patients. Ossur then asked me if I’d like to be a demo runner at the trade fair and other events.  I had no problem presenting myself as I don’t hide at other times and have an open personality.  And it’s fun for me. As I’m self employed I could always fit it in time wise.  Besides,  I enjoy being able to help someone by giving them little tips or enabling them to get on better with their prostheses. 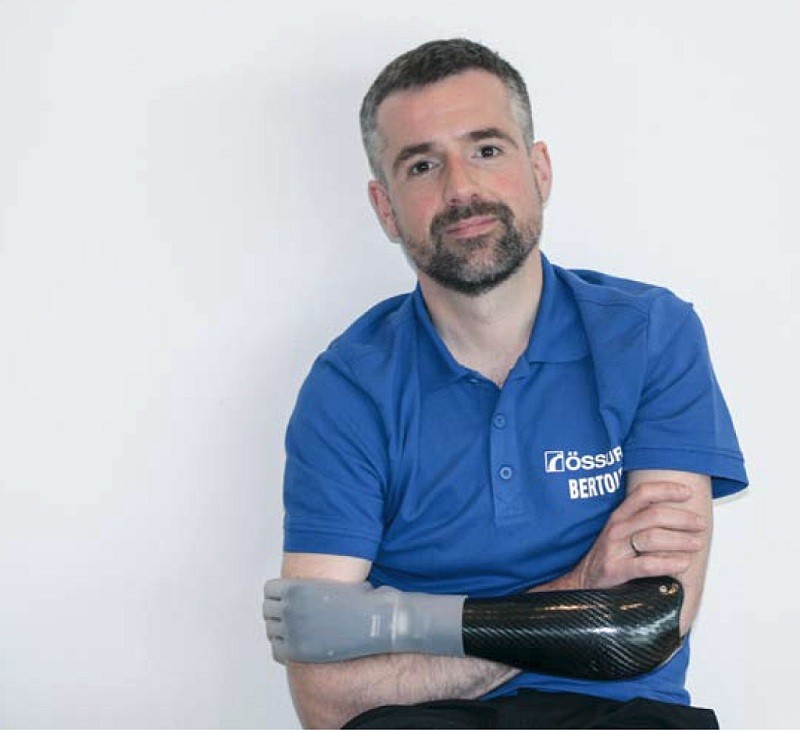 I think I’m the most senior Touch Bionics user, this is my 5th OT World.  I found out about the i-Limb ,by coincidence, through the Internet.  An arm prostheses as there had never been before. There were long discussions with my health insurance company but, in the end, it was granted.  I then wrote a mail to Touch Bionics telling them that I found the prosthesis super. A phone call followed,  in which I was asked whether I’d like to be a demo user at trade fairs. The work cooperation was intense because I did a lot of testing for the , then, small company.
This hand prosthesis has given me a great deal of quality of life,  for which I’m very grateful! I hadn’t been satisfied with suppliers up to then, they were just standard.  And Touch Bionics was a real under dog then but I wanted to support them with all my heart because I really wanted the firm to become better known. I’ve got more self esteem through this prosthesis and that should be possible for all concerned !
At last,  the suppliers’ lousy cosmetic was forgotten. The cosmetic with the window dummy charm of the 70’s. At last, there was a hand prosthesis you didn’t have to be ashamed of.  People are very interested and ask about it.  I think that’s good because in that way you can present another picture of people with disabilities: That handicaps can also have something to do with high tech.  The best moments are when someone comes to you at the trade fair, perhaps freshly amputated,  and you can help them. Open up a new world for them. Or the health insurance representatives who don’t know the difference to other prostheses. 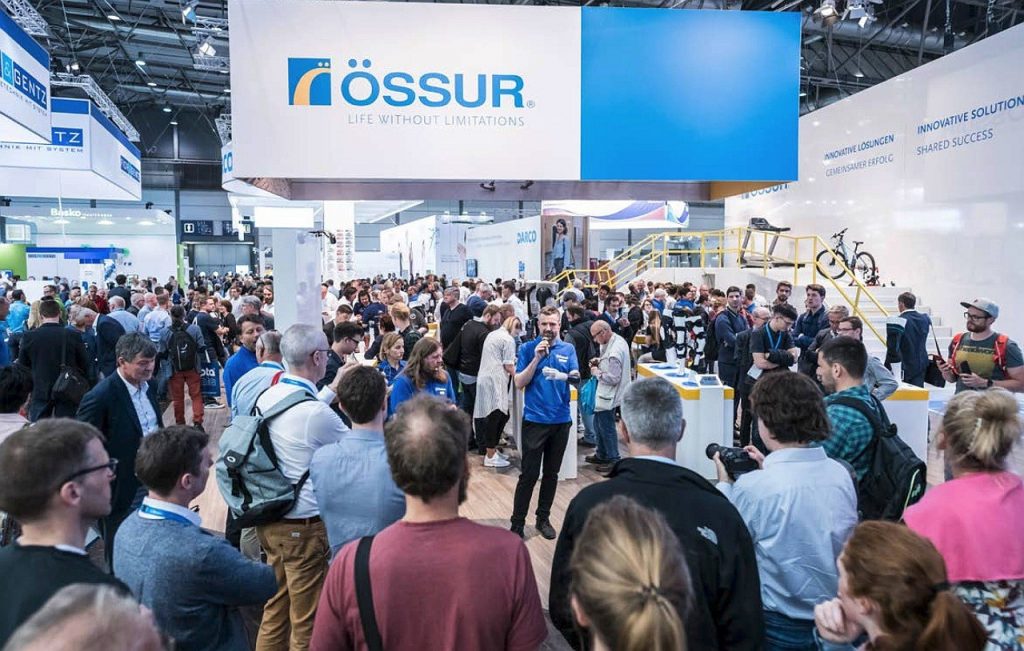