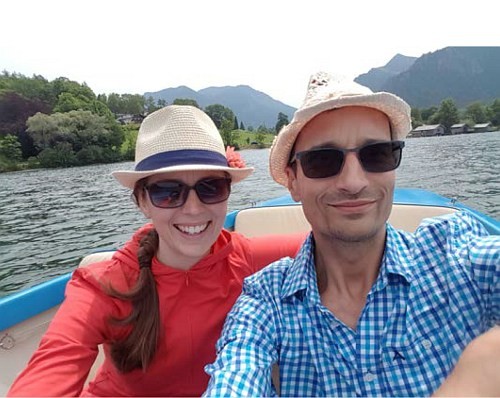 This hand is my personal small wonder

Sarah Hößl lives with her husband in Munich, both are passionate dancers and have made this their profession. The dancing teacher has dysmelia, her left hand is not fully developed. She has a wrist but the fingers and the palm are a great deal smaller.
The hand became inflamed, a good two years ago and pain accompanied Sarah throughout the day. Using the hand was vertually not possible. Her orthopedist suggested finding out what technical solutions there were.

Sarah, 35 years old, who had never before worn a prosthesis, managed fairly well. “You can cope with a small hand when you grow up with it. I can’t grip. Only together with the other hand or push”, the woman from Munich says. “I didn’t really have any problems with my hand during my childhood”, Sarah remembers. “I was often driven by ambition! When it came to tying my shoes, for example. It used to be that you couldn’t attend school if you couldn’t do it. I practiced for a long time only to discover that the other children couldn’t manage with two hands what I could do with one. My father built a box, as a help, on the handlebar of my bike into which I could put my hand to stop me slipping on uneven surfaces. I thought that was stupid and didn’t ride my bike for a long time. Some time I was invited by some other children for a bike ride. I mulled it over and then thought: Well, you don’t have to use the box! I just put my hand next to it…” Sarah’s demands on herself were to make everything as normal as possible. “But I had to realize that, here and there, it wasn’t always possible. Like the time when everyone was playing the recorder and I was desperate to do it, too. I got one and tried it out – but it doesn’t really sound good if you can’t cover all the holes…”

On the advice of her orthopedist, she and her husband both looked into and were astonished at which technical solutions there were for people with restricted hand functions. It was, however, difficult finding the right contact in Munich, Sarah says later.” I phoned so many people, and in the end it was again the orthopedist ‘s recommendation, who had been asking around in the meantime, to go to Sanitätshaus Streifender.

Streifender – the name is mostly known in the south of Germany and stands for high quality orthopedic suppliers. What began as a small business developed, in nearly a century, to be a wide network of suppliers in Munich and Oberbayern. The family firm in the second and third generation, with more than 700 employees, is one of the biggest suppliers and specialists in its area.

Here she is advised and looked after exclusively by Tilo Sünder, orthopedic technician master craftsman, as well as being the vice head of orthopedic technology at Streifender. “The problem is that too few people in the professional treatment area, doctors, physiotherapists or orthopedists know what solutions for bodily restrictions are now available. There’s a big hole in the information chain. You must also realize that the number of people affected here, in comparison to other illnesses, is naturally quite small. You have few specialists who actively explore the subject”, the passionate technician explains.

They agree on an appointment and Sarah lets herself be informed of what is possible in her case. “First you have to realize what is possible: What do you want? Should the prosthesis look as natural as possible and hardly be noticeable, or do you want to do something with it? Should it help in daily life or just look smart?” Both decide to equip Sarah with one of the i-Digits Quantum from the Islandic prosthesis manufacturers Össur. They had started a whole new chapter in the area of myeolelectric partial hand prostheses some time ago – it is the first multi articulated partial hand prosthesis that can be steered with only one gesture.

“I didn’t want an ornamental prosthesis, but definitely one you can do things with. I’m not ashamed of my hand. Not at all! In my situation it can only get better with a prosthesis”.

Sometimes you are influenced by the people around, explains Tilo Sünder. He looked after a patient who, after a few years, wanted a skin coloured prosthesis because his daughter’s friends were always aware of his prosthesis and his wife didn’t like that. “Ideally the users must make their own decisions”, the orthopedic technician master craftsman recommends.

In Sarah’s case a specimen product was granted some time later. Sarah waited, full of excitement, for the day when she was told : Your prosthesis is ready! “As a technician you first of all have to find out: What does the user want? You have to try to describe the product and what it more or less looks like, so that the user knows what he or she is getting. So you must know the product. Some have clear advantages but don’t fulfill the cosmetic requirements”. And then came the moment when Sarah could collect the hand prosthesis, made up of a silicone shaft, a carbon fixture as well as the i-Digits Quantum and the accompanying accumulator battery pack.

“It was the absolute flash! All my life I had been unable to grip with my left hand. It was so wonderful! To have the hand on and then grip – incredible! During the first weeks most words were : Johann! Look, look, look!!!! or : Shit! When I had broken something” says Sarah and laughs. “You have to say that I didn’t start with the easy things but those that Tilo advised me not to do. Imagine, you can hold a banana in your left hand , for the first time in your life, and then you peel it! How cool!” Sarah’s whole face beams. You are well aware of how this prosthesis has changed her life. She is full of energy and tells of how eating with a knife and fork is now her favorite pastime. “Unfortunately, that didn’t work before. Simply cutting a pizza or eating without wondering if something is just about to sail off the table again because the fork has hit it unfavorably. I usually had to ask for help.”

The big day came after the 4 week test phase and Sarah proved the functionality of the prosthesis and the long awaited support in front of her technician and a representative from the health insurance and the medical services. The prosthesis was granted after that. 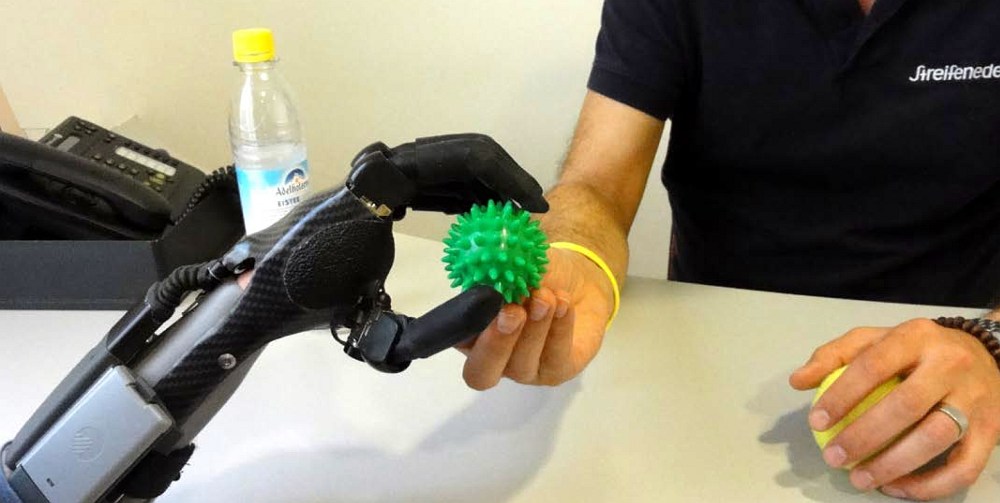 The i-Digits Quantum was specifically developed for users with partial hand loss. Sarah can easily activate grip patterns, by a hand movement, with the help of the patented i – Mo technology: Should the i-Digits Quantum move in one of four directions, then a deposited grip from the grip pattern is put into action. There are up to 36 programmed and individual grip patterns available in all. “If you hadn’t been able to grip before then 3 grip patterns are incredible to you!” adds Sarah. The happy lady from Munich carries on and reports that she was completely impressed by the technology and got used to it surprisingly quickly.

“The product supply is a wonder to me and it was really quick. The hand gives me safety and freedom! Whereby, safety is an important aspect, for example, when bike riding or using knives in the kitchen”. Tilo Sünder points out, however, that not everything is possible with this prosthesis. Washing the hand after cooking, for example, there are limits. “I use this black disposable glove so that Tilo doesn’t have to clean out the leftovers from breakfast every week” Sarah explains laughingly. Just lately she cut her finger. At first she was shocked and then began to laugh. It didn’t hurt!

The fledgling user felt even safer after extra user training at the Össur Academy. “I discovered, for example, how robust the hand is and where I can touch it without breaking anything”. 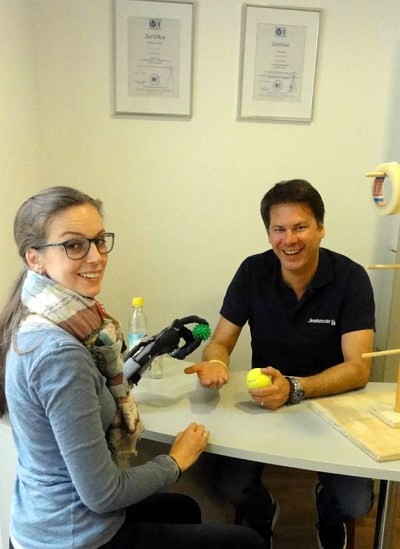 Sarah has had the prosthesis for a year now and brings it along to be checked. “The work together with Tilo was so wonderful! I felt well looked after and enjoy coming here.” Tilo Sünder is pleased with this statement and says that everyone must decide for themselves which medical supplier they go to. It’s important that you feel good and get on with the technician. If not, you should change your medical supplier, he advises. “If they know you, they won’t go anywhere else” Johann, Sarah’s husband, throws in. He and his wife met at an association meeting and have been together ever since. It is not only the passion for dancing that unites them but also the challenges they have had to overcome. Sarah, with her dysmelia and Johann, with a diagnosis of Parkinson.

Sarah will soon get Grip Chips giving external signals as to which movement is to be made. “That would be great for car driving”, Sarah calls out enthusiastically.