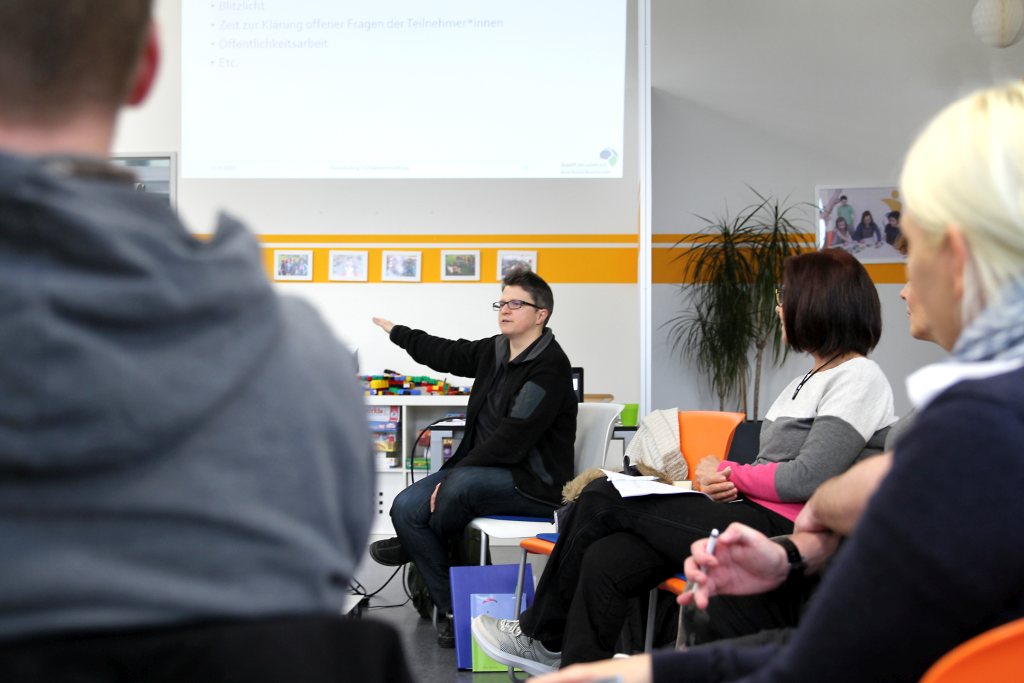 a sympathetic ear and a shoulder to cry on

An amputation is a traumatic experience – for the patients but also for the friends and family. It’s good to have someone at your side who has first-hand experience of this life changing situation: a peer in hospital. Anpfiff ins Leben e. V.  (Whistle into Life) is training encouraging companions using a new series of seminars.

„That’s it now.“ The first words that shot into Björn Thielmann’s mind, seconds after his accident. He was on his motorbike when a car, straight in front of him, cut the corner: no chance of avoiding it. His motorbike was a write-off – his knee, too. „The leg just dangled“ said Thielmann. He was sure that he wouldn’t survive the accident. However, despite all predictions, he managed. „When I woke up after the operation I was naturally relieved – but it was immediately obvious that my leg was gone.“ He was 23 years old then and a builder. „My life was brutally ripped from me, from one minute to the next, nothing was as it had been.“ He had so many questions: What happens now? Will I ever be able to walk again? Will I get an artificial limb? How will I be able to get back to a working life as soon as possible? But he got no answers from the doctors or the social medical service. „I felt completely abandoned“ Thielmann says looking back. That was 17 years ago. Since then the hospital has phoned him up repeatedly when a young person was in the same situation. Thielmann, now living in Mannheim, has always driven back to his home town, has visited the people in hospital, has talked with them, answered their questions or just listened. „I realized how important it is that someone is there who understands the situation, who has gone through the same thing.“

That’s why the 39 year old immediately enroled for the seminar „Peers in Hospital“ given by the movement promotion „Anpfiff ins Leben“. „I wanted to use the opportunity of handling the hospital visit more stucturally and professionally – until then I’d always used gut instinct.“ Using his new training he wants to save people from going through what he had to.

Since 2009 there has been a Federal Association Programme „Peers in Hospital „(PiK) for people with arm or leg amputations (BMAB). For 4 years now the Association has offered a one day training with lectures. „It’s a super programme,“ says Diana Schütz who, herself, had her leg amputated at the thigh during childhood and who started the movement promotion „Anpfiff ins Leben“. However, Schütz wanted to give more than one day to the peers who were interested. „To accompany people in such extreme situations needs a great deal of sensibility – which is why I wanted to offer an intensive seminar dealing with conversational guidelines and self confidence.“ At the same time the intention is to give more drive to Peers in Hospital using the „Anpfiff ins Leben“  resources and network. The aim is for amputees or people with dysmelia to live an active life using the suitable sport options.

Schütz managed to get Dorothee Schmid and Meike Ehrlich, who together led the mentor training for the children’s cancer foundation until 2017, to work with her.

„We want to give the participants self confidence, so that they can enter the talks with a good feeling. They learn to actively listen and also the foundations of conversational guidelines,“

The 14 participants now meet on 4 weekends at the ‘Anpfiff ins Leben-Pavillion’ in Hoffenheim. „The echo was so great that we decided at sometime to limit the number of participants“ explains Schütz. They come from the metropolis but also from Hannover, Tübingen or Bavaria, are between 22 and 60 years old and are all amputees. Some because of accidents but others because of illnesses such as cancer. At the first appointment in February the meet and greet was the most important for the participants – and their personal histories. „They take these with them to every peer talk and as, more than likely, traumatic experiences are involved it is important that they have come to terms with them“ says Schmid.

The accident in which cost Marec Porebski his right leg was also a traumatic experience. That was in 2013, just as he was about to start a new life in the Republic of Dominica – his personal paradise. He, a pedestrian, was run over by a mirorbike. His leg was torn off as he flew through the air. He was in a coma for a long time, fighting for his life. When, at last, he was stable his family arranged his return flight to Germany. Porebski told us: „I’m standing here with nothing, everything I’ve built up is gone.“ At some time a girlfriend took him to a charity football game where he met Diana Schütz.

„That meeting gave me so much motivation and showed me what an amputee can manage and achieve.“

Also for Björn Thielmann the meeting up with other amputees, while on a skiing holiday, showed him what is possible and gave him courage.

„All of a sudden there’s someone telling you the things on offer for amputees, which presciption is needed and giving you tips, sometimes little things which help in daily life.“

Porebski nods in agreement: „It doesn’t always have to be anything medical or legal – but there’s someone there to take you to a concert or that you can ask questions to about sexuality – you’re not going to ask your father or doctor.“ And Thielmann,  Porebski and the other course participants want to be this somebody for as many patients as possible. It’s not only about their own training. All 14 travelled there with the motivation to set up a broader Peers in Hospital programme, in order to reach more people, to motivate them into doing sporting activities and thus giving them more quality of life.

Their own homepage, fliers and exchange portal for peers – the suggestions just flew backwards and forwards around the room on the last day. The atmosphere was good, the participants got on really well together. And one thing is clear: the seminar is only the beginning, they want to move things together.