A few years ago, to be precise, in our December 2014 edition, we introduced Alex Zanardi.  We ask our ourselves what he’s doing now after such a long time: racing enthusiastically – what else!

Alessandro Zanardi proved himself in his noteworthy start as a guest at the night race in Misano at the DTM weekend (25th-26th August). He achieved a sensational 5th place in the race on Sunday. He has been successfully racing with BMW cars since 2003 but this was a first time occasion for him in Misano: He took part in a race without his artificial legs for the first time. The BMW engineers had developed a system for the BMW M4 DTM which enabled Zanardi to brake using his hand.

He looks back on this very special weekend in an interview (with the colleagues from BMW Motorsport) and describes how he experienced the BMW family, the DMT drivers‘ camp and his delighted fans – and gives an insight into the planned start of the 24 hour race at Daytona in January 2019.

What was your first thought when, in the second race, you came through fifth?

Zanardi: „At first I thought it was a joke when my engineer told me my position via radio. I hadn’t expected it and it’s too much if you judge my performance neutrally. I was very optimistic after my test drives but was afraid after the first session that I’d easily come in last, that it would be my fate to drive behind everyone else over this weekend. The problem was that because of the constantly changing conditions, from outside, I wasn’t able to build up my experience from session to session. Every time I went onto the race track something was different from before. With this background, the fifth place is fantastic, and then with good, competitive circuit times. It feels like a gold medal.“

What did you enjoy most?

Zanardi: „The shared time with all the people who helped me to make this weekend in Misano possible and to pull it off.“

What was the greatest challenge?

Zanardi: „Keeping the BMW M4 DTM on the track (laughs). But I managed. I’ve won a lot of races in my career and believe that I now have the ability of taking a vehicle like the BMW M4 DTM to its limits. But compared with other drivers I’m missing the specific DTM experience.“

How well have you been accepted into the BMW and the DTM family? 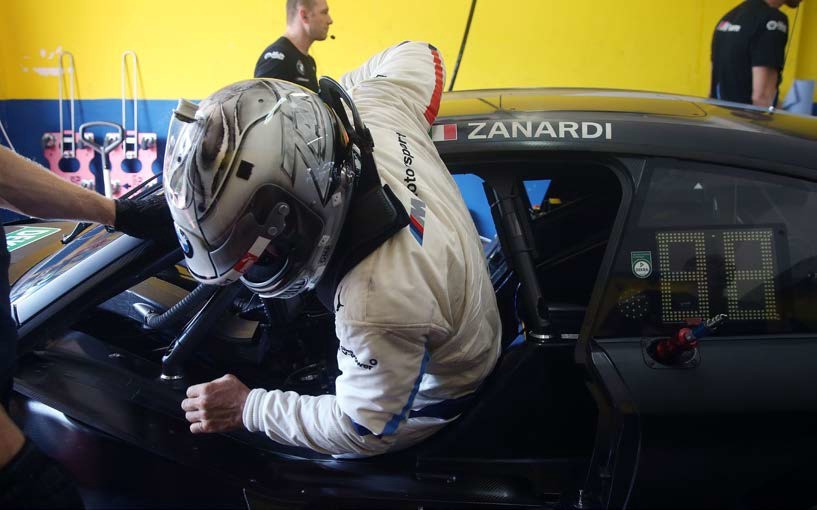 Zanardi: „The DTM family has really accepted me and I felt very welcome in Misano. Many thanks for that! As far as my BMW family, and especially my team are concerned: They gave me the feeling – and I could see it in their eyes – that they felt good with their job and that I was exactly the man that they wanted in their car. The aim was not to win the race. It was about getting the best out of the car within my possibilities. Everyone in the team identified with this aim – it was worth its weight in gold for me. I’ll carry this feeling in my heart forever. The weekend was absolutely unique.“

The Italian fans welcomed you enthusiastically, too.

Zanardi: „Let’s put it this way: I believe that in my life I’ve been the hero of many romantic stories that have had the happy endings people have hoped for. I’ve managed a few things that people perhaps wouldn’t have believed that I was bodily capable of. On a day like this you stand in front of the mirror and remember everything you’ve experienced over many years. It’s magical to know that so many people really identify with what I do. It makes me incredibly proud.“ 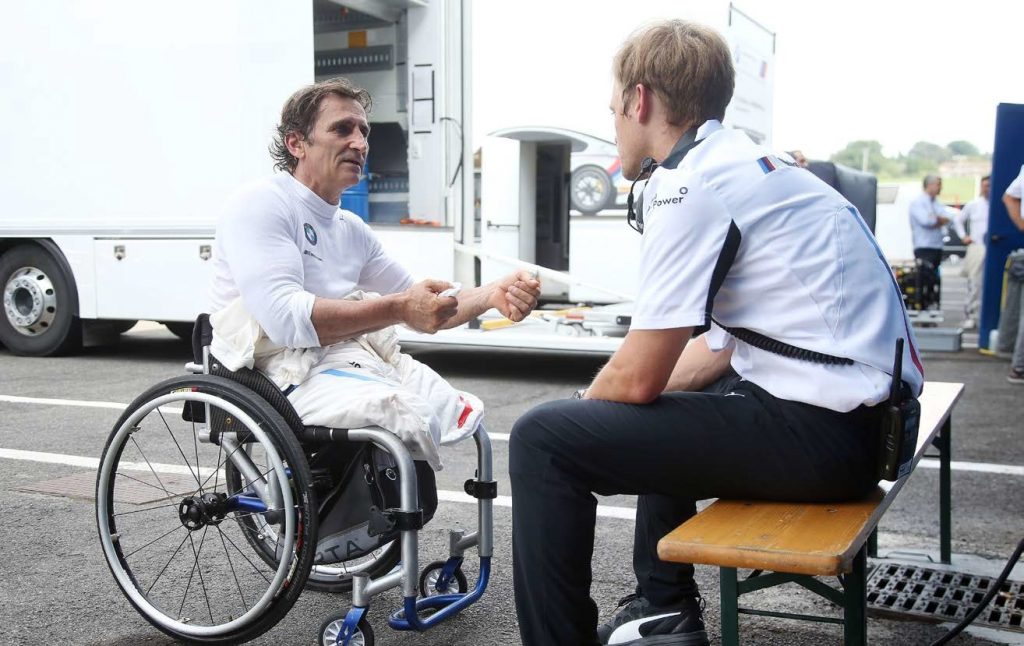 It was impressive to see how many things you can do with your hands simultaneously.

Zanardi: „True, it was fairly acrobatic (laughs). But I don’t have another possibility, so I adapted quickly. Once you’ve accepted a task a lot of things aren’t as difficult as you thought they would be. I, and the engineers in Munich, intensively puzzled out the best possible solution for me and I think we’ve found a wonderful system. We’ve taken a big step forward and now have an excellent basis for my planned start at the Daytona 2019 24 hour race. I think if there was a challenge to drive for 24 hours non-stop then I could do it, purely physically, with this system. I certainly wouldn’t be as fresh as a dewdrop but it’s doable (laughs). Many thanks to all concerned for their thirst for knowledge and their ambition to make an even better driver out of me. I can hardly wait to start the preparations for Daytona.“ 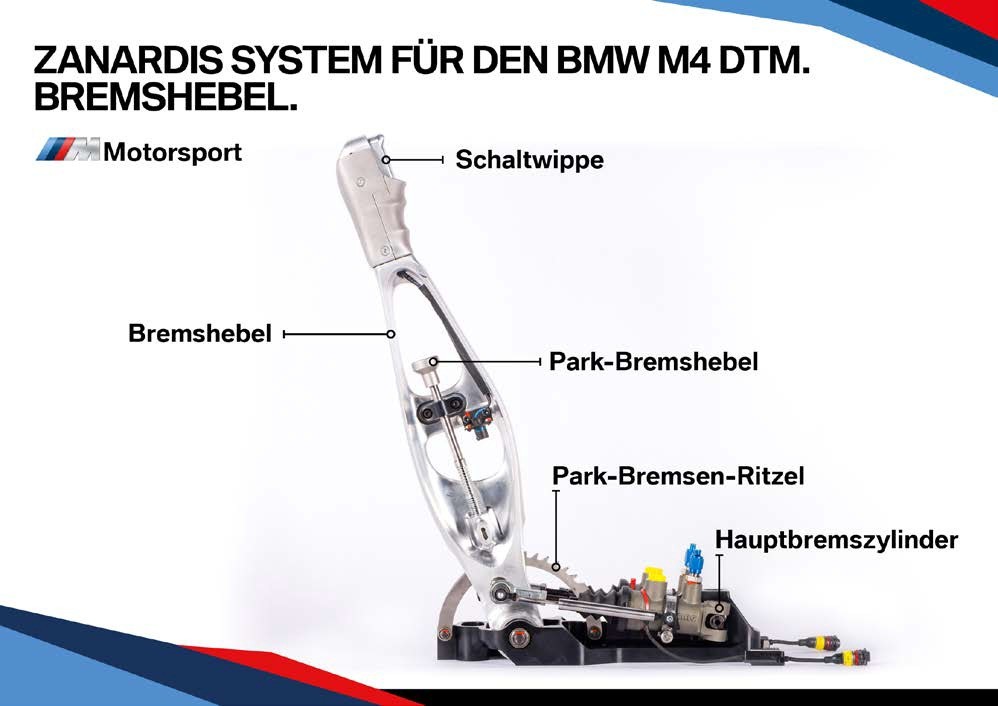 Driving without an artificial leg is no handicap from the safety aspect for Zanardi. Rules state how fast a driver must get out of his car in the case of an accident. „All DTM drivers must be able to leave their cars independently in seven seconds from the driver’s seat and in nine seconds from the passenger seat,“ explains Christian Schmidt, the technician delegate of DTM. „In that way it should be certain that external help is unnecessary in an on board fire, for example.“

Zanardi trained many times for the official aptitude test – where he stayed well under the time limit. To exit from the BMW M4 DTM he needs – with helmet and HANS system – about four seconds. „I had no worries about this test,“ Zanardi confirms. „It was clear from the start that I’d easily manage. There are enough places in the DTM cockpit where I can pull myself out.“ The fact that he isn’t wearing the prostheses is even an advantage. „I’m certainly quicker without my prostheses than with them. There’s more danger of the limbs getting stuck somewhere.“

Up front: „I’m far more agile without my prostheses.“

Alex, why is it more comfortable to drive without the prostheses?

Alessandro Zanardi: „The reason lies in the technical functioning of the limbs‘ shafts. Thanks to a kind of vacuum effect they sit tight and don’t allow for any sort of transpiration. But the limbs are the body’s cooling system. Our body temperature sinks when blood circulates through our extremities – with my prostheses I’m almost like a motor without a cooler. That’s not exactly helpful when you’re sitting in the cockpit of a racing car where the temperature often rises to an unbearable level. When we were thinking about the Daytona 2019 project, I told the engineers that this should be the important alteration we should try for. And when I got the offer to drive DTM in Misano we’d already completed enough preparatory work, and had made such progress, that I believe driving without prostheses, also as far as the performance is concerned, is helpful. The advantage it brings me physically grows with every lap. The difference is unimaginable. That’s why I’m sure it’s a better option for both one hour races with the BMW M4 DTM in Misano.“

Until now you’ve run to your car and got in like any other driver. How will you get into the car without your prostheses?

Zanardi: „Getting into the car is absolutely no problem – quite the opposite because I’m far more agile getting in and out without the prostheses than with them. It’s ten times easier for me. My prostheses are only a kind of support, good for nothing else. I must pull them into the car using the strength in my arms and need my arms to pull the weight of my body in. Nothing hinders my movements without my prostheses and I need to pull up less weight. So I’m much more agile. The plan is for me to drive my wheelchair to the car and then get into the cockpit. The same getting out. And in case I stop on the track and have to get out of the car quickly : Not so pretty for the spectators, but I can assure you that I can run much faster on grass or gravel on my arms than with my artificial legs.“

In the case of an accident it must be easier than before to rescue you as you are more agile without the prostheses.

Zanardi: „Exactly. That has never been a reason for worry. Not for me and not for the people who have known me long.“

Let’s imagine the car gets stuck in a bed of gravel. Do you just get out and run away on your arms?

Zanardi: „Yes. As I’ve already said, it doesn’t look wonderful when someone runs like that. But it’s a fact that it would be easier to get away from the car without the prostheses than with them – especially on gravel. I’ve already had that experience. I managed somehow to run through a bed of gravel with my prostheses and without sticks, but it wasn’t easy. And the probability of putting a foot down wrongly and falling is greater. Such a fall wouldn’t be dangerous for me – I’ve a lot of experience in falling – but it would naturally slow my movements down when getting away from the car. So, also from this point of view it’s a better option. That doesn’t mean it wouldn’t be safe if I were to decide to drive again with my prostheses. Obviously, we thought through all aspects in detail because we don’t want to run any risks as far as safety is concerned – either for me, or for BMW or others. When you’re doing something at such a high standard the subject of safety must be examined minutely. And we wouldn’t start this adventure if we didn’t have the feeling that we had dealt with every aspect of this area. „

We from Barrierefrei wish Alessandro Zanardi a maximum of fun and success in the future! 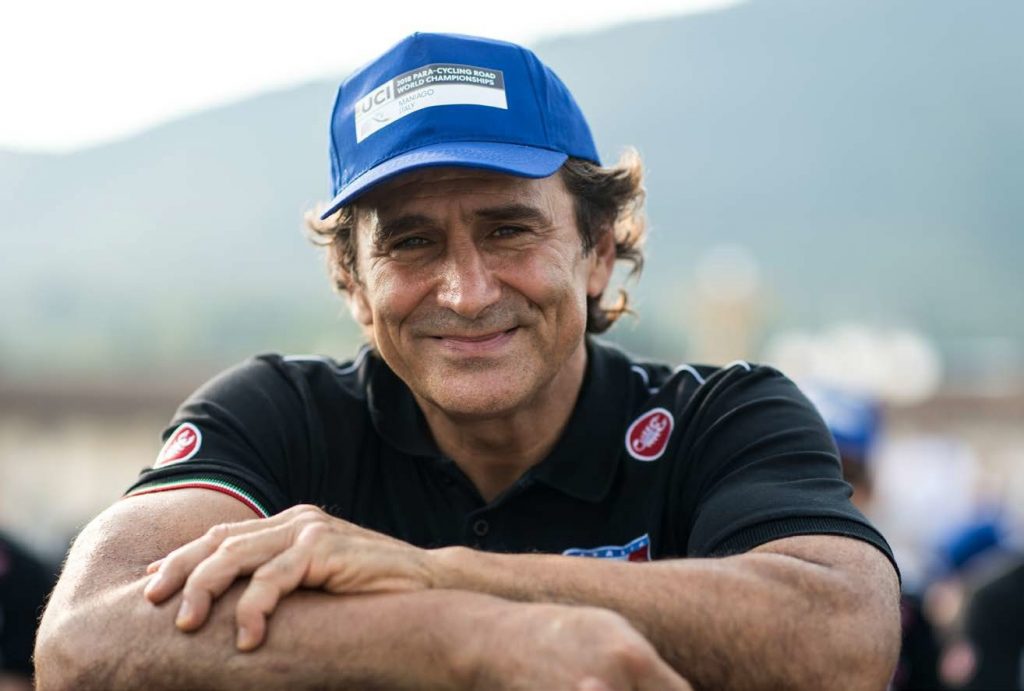