The Special Olymics are guests in Kiel in 2018

From 14th – 18th May, in only a few weeks, more than 4600 athletes will spread out in Kiel’s inner city Olympic flair. The event is ever-growing and more than 13,000 participants are expected this year.

The biggest sporting movement for people with mental and multiple handicaps, Special Olympics was founded in America in 1968 and is officially recognized by the Olympic Committee. The initiative was started by an idea from John F Kennedy’s sister, Eunice Kennedy-Shriver, making it possible for the mentally handicapped to take part in sporting events. More than 5 million athletes represent 170 countries in Special Olympics today.

The German representation was founded on 3rd October 1991 as the Special Sport Association Germany and has been an association with special duties in the Olympic Sports Association Germany since 2007. Members of SOD are usually organizations, workshops and schools for the mentally handicapped as well as clubs and individuals in 14 national organizations. Schleswig-Holstein’s organization has the fourth largest delegation with 595 starting in 15 different diciplines. Baden-Württemberg has the largest delegation with 778 athletes, followed by Bavaria (690) and Nordrhein- Westphalia (677). In Kiel the athletes will go to the start with 19 very different diciplines, such as beach volleyball, judo, bowling or power-lifting. 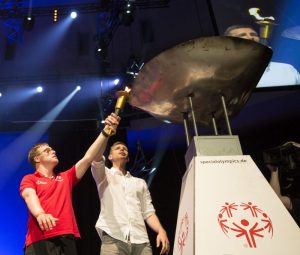 There is much more on offer in Kiel besides the exciting sport contests. There is an inclusive contest-free participation on offer for all visitors, a free health programme for the athletes and mixed teams of people with and without handicaps show their abilities at the Special Olympics Unified Sports contests. There are also special theme days with a colourful programme, „All on Board“, giving families, children, school children and sports club members the opportunity to actively take part in sport and to make contacts.

The activities all have in common that rivalry and winning are not in the foreground, rather the pleasure of doing sport and a shared experience, true to this year’s motto:“ Strong Together“.

Barrierefrei met part of the Schleswiger Werkstätten team at the end of January, among others Michaela Harder, this year’s „Face of the Contest“. She excitedly reported the photo shootings and her anticipation on being allowed to participate in May. Katja Herber, the head of the delegation, who has been involved with the Special Olympics programme for several years, was there, too. We will keep our fingers crossed for the Schleswiger Werkstätten team and wish them success!